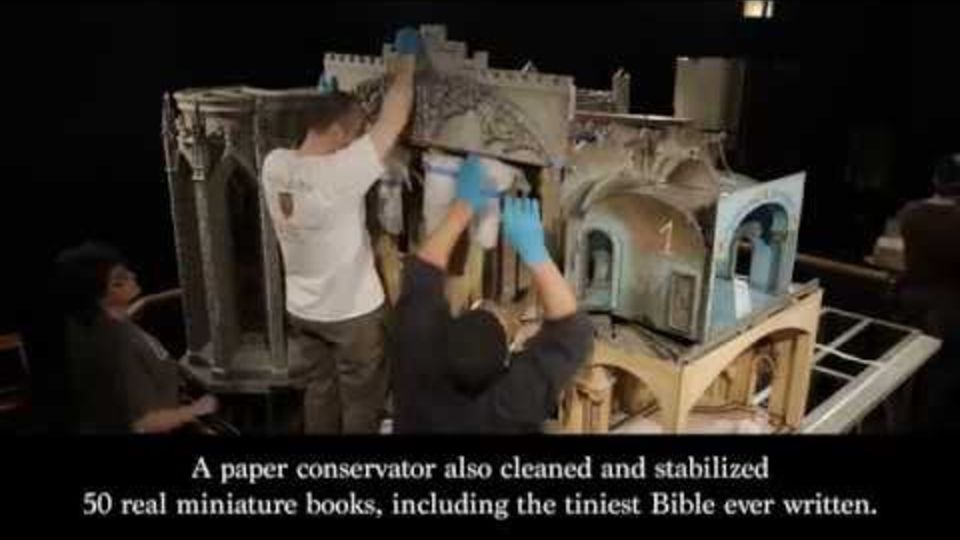 WHAT:
Colleen Moore’s Fairy Castle is a fairy dream home adapted to fantastic proportions. This elaborate miniature house was created in the 1930s by silent film star Colleen Moore, fulfilling her childhood fascination with doll houses. The Fairy Castle, filled with remarkable miniatures and artifacts, is a timeless reminder of the imagination, ingenuity and craftsmanship of cultures and artisans all over the world. It became a permanent exhibit when it was donated to the Museum of Science and Industry, Chicago in 1949, where it is situated on the Lower Level.

The Fairy Castle is displayed behind glass, and the light, temperature and humidity in its environment are carefully controlled to ensure that the artifacts will be preserved for generations to come. Millions of guests have enjoyed their visit to the castle since it first arrived at the Museum, and an audio tour provides guests details of the castle’s many rooms and treasures.

The 9-square-foot castle features about 1,500 miniatures and cost nearly $500,000 at the time it was created. It will delight you with its tiny treasures, including:

HISTORY BEHIND THE CASTLE:
Colleen Moore was a silent film star in Hollywood during the 1920s, and her position as one of the most popular actresses gave her the resources to make a childhood dream become a reality. She owned several elaborate doll houses as a child, but later in life, her father, Charles Morrison, suggested she should pursue her passion for miniatures and doll houses by creating one of her own. In 1928, she began the plans dream home of fantastic proportions. She enlisted architect and set designer for First National Studios, Horace Jackson, to create the floor plan and layout, while art director and interior designer Harold Grieve, who had redesigned Colleen Moore’s mansion, assisted with the interiors. Between 1928 and 1935, about 100 people worked on the Fairy Castle.

In 1935, Moore organized a national tour of the Fairy Castle to raise money for children’s charities, and it stopped in the toy departments of major cities’ prominent department stores. In 1949, Major Lenox Lohr, the director of MSI, convinced Moore to have the Fairy Castle make one final stop at the Museum, where it has become a favorite exhibit, loved by generations for the remarkable creativity and imagination it represents.

In 2013, the Fairy Castle underwent a public conservation to stop ongoing deterioration and ensure its long-term preservation. This process repaired damage to the nearly 80-year-old structure—some of which was caused by the aging original electrical and plumbing systems—and replaced these systems with more sustainable options.

COST:
Included in Museum Entry, which is $21.95 for adults and $12.95 for children 3-11. City of Chicago residents receive a discount on Museum Entry.

About the Museum of Science and Industry, Chicago

Pictured is the exterior of Colleen Moore's Fairy Castle.

Pictured is a side view of Colleen Moore's Fairy Castle.

Pictured is the Great Hall in Colleen Moore's Fairy Castle.

Pictured is the Drawing Room in Colleen Moore's Fairy Castle.

Pictured is the Chapel in Colleen Moore's Fairy Castle.

Pictured are some of the tiny artifacts in Colleen Moore's Fairy Castle.