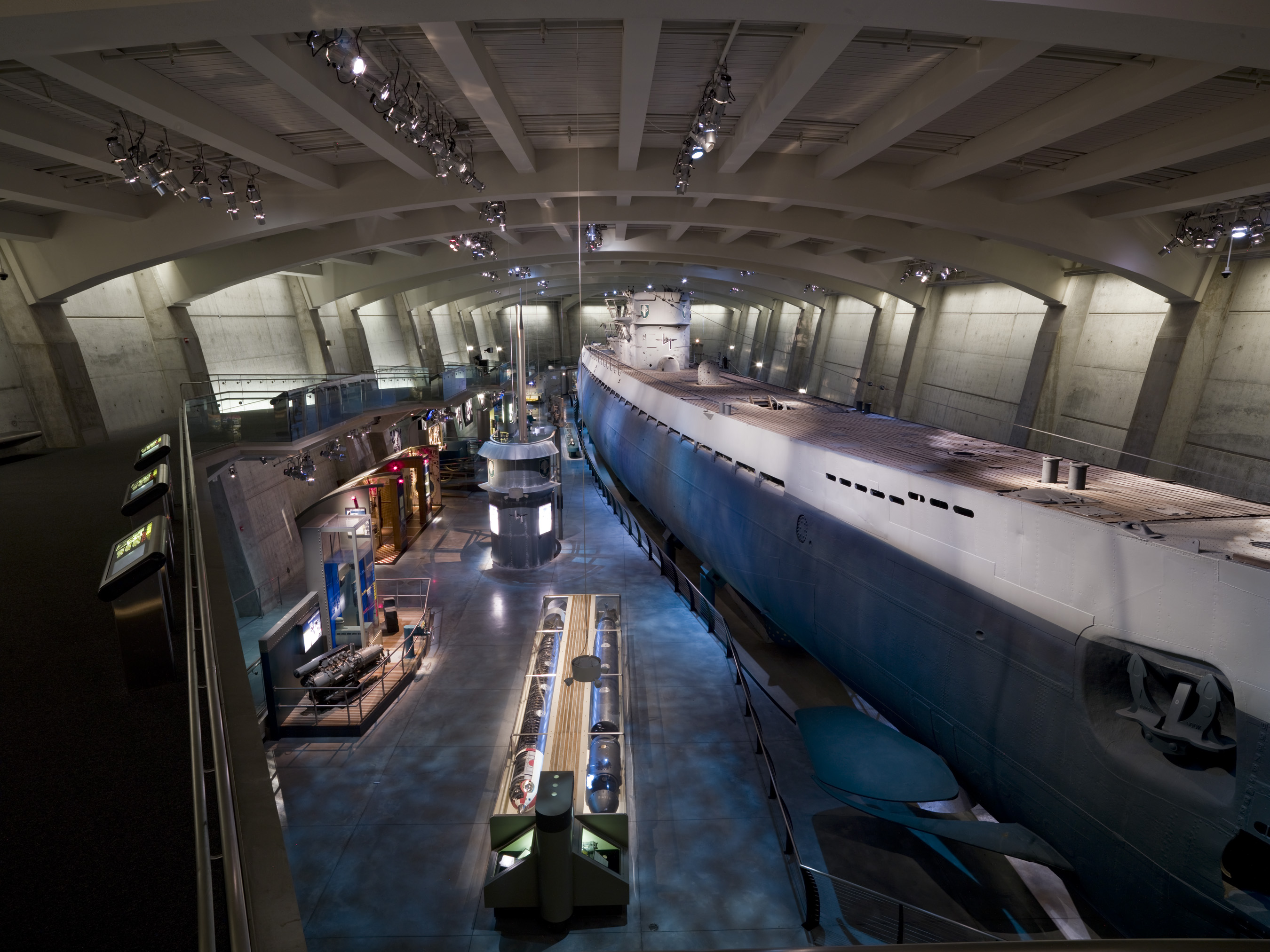 U-505 SUBMARINE RESURFACES AT MSI

CHICAGO—The Museum of Science and Industry’s beloved U-505 submarine has resurfaced in an amazing indoor exhibition that showcases the story of the German sub’s legendary capture in World War II and explores technology and life aboard the vessel.

The U-505 Submarine exhibit offers multiple interactive units, nearly 200 artifacts, archival newspapers and photography, videos narrated by Bill Kurtis, radio transmissions, re-enactments of key events, dramatic artwork, as well as exciting testimonials from the veterans of Task Group 22.3 who made the remarkable capture. The sub is now the world’s only remaining Type IX-C submarine and a National Historic Landmark.

“The U-505 has been a Museum favorite since 1954, with millions visiting to learn its story,” said David Mosena, president and CEO of the Museum of Science and Industry. “At MSI, we are so proud to be the steward of this amazing and historic artifact and to surround it with an interactive exhibit that is worthy of telling that story. This exhibit is a testimony to the strength, courage and leadership of the brave men and women who fought for the United States in World War II.”

The exhibit begins by immersing guests into the history and milestones of World War II, Hitler’s drive for control and the Battle of the Atlantic. Guests learn about the use of U-boats as a deadly tactic in keeping necessary supplies from the Allies and about the naval task groups that were formed to hunt down the German subs.

Navy Captain Daniel Gallery, a Chicagoan, led one of these groups, Hunter-Killer Task Group 22.3. Gallery was determined not only to find a German U-boat as it was prowling the dangerous seas, but also to capture and bring it back for its wealth of intelligence information

Through special effects, re-enactments, archival footage of the day of capture and amazing sound effects, guests will wind through the exhibit and follow along with the story of the boat’s capture on June 4, 1944. Then comes the exciting moment when they turn a corner to first encounter the 700-ton, 252-foot U-505 “face to face.” The exterior of the sub has been completely refurbished, and with exacting research, it has been returned to its original paint colors. Dramatic lighting effects make the sub seem as if it is still prowling the depths of the Atlantic.

Those who have purchased tickets for the optional on-board tour take a journey back in time to see just how the crew of a submarine lived and worked on the high seas during World War II. Led by an exhibit guide, guests are able to view authentically recreated crewmen bunks and the galley, wedged in among the mechanical workings of the sub. They discover just how crowded life was on board this vessel, as well as the intricate mechanics that made the sub function.

Surrounding the sub, on the lower floor of the exhibit, several interactive units explain how a submarine like the U-505 navigated the seas and engaged the enemy:

Crack the Code: Decipher and encipher covert messages with the use of the complex Enigma code—the code by which German forces communicated in secret.

Dive Trainer: Attempt to maneuver the sub through a controlled dive, while battling against dangerous depth charges!

Life On Board: Guests are exposed to the sights, sounds and feel of the sub’s close quarters during wartime.

On Patrol: A recreated portion of the sub’s conning tower is complete with both an attack and a navigational periscope. Using these periscopes, attempt to launch a torpedo as well as determine their vessel’s bearings and decide whether it is safe to surface.

Buoyancy Challenge: Learn about buoyancy in this timed challenge with a model sub.

The exhibit finishes with a stop in the Gallery/Lange Theater, where guests can see a short video that chronicles the reconciliatory 1964 meeting between Captain Daniel Gallery and Harald Lange, the German captain of the captured U-505.  As guests make their way out of the exhibit, they enter the Tribute and Memorial Area, which honors the 2,200 brave members of Task Force 22.3 by name as well as the Merchant Marines, the WAVES and the German crew of the U-505.

The sub became a part of the Museum’s permanent collection in 1954 with the help of its former captain and Chicago native, Dan Gallery. The boat was docked outside the Museum, exposed to Chicago’s elements, for almost 50 years and remained a Museum favorite, toured by millions of guests. The harsh Chicago weather and age took its toll on the boat, and in February 2003, construction for the new 35,000 square-foot, indoor exhibit began.

Approximately 1,000 hours were spent repairing and conserving the submarine prior to its move. In April 2004, the boat began its complex move from the southeast side of the Museum to the northeast side of the building with the help of 18 self-powered dollies, guided by remote control, moving one inch per minute. The intricate transport of the boat was directed by NORSAR Inc., an engineering transport and lifting company that specializes in moving barges and other large industrial objects. The U-505 was moved more than 1,000 feet, over the course of several days, and had to make several 90-degree turns. It was lowered, four inches at a time, into its new home—the underground exhibit space, which measures 75 x 300 feet and 42-feet deep.

The 35,000-square-foot U-505 exhibit is included in Museum Entry. The optional on-board tour of the sub, however, requires an additional timed-entry ticket, which can be included in the Museum Explorer ticket packages. Capacity is limited. For quick entry into the Museum, guests are encouraged to buy Museum tickets online at msichicago.org.

About the Museum of Science and Industry, Chicago (MSI)

The U-505 Submarine is a 35,000-square-foot permanent exhibit that that showcases the story of the German sub’s legendary capture in World War II and explores technology and life aboard the vessel.

Guests are put on patrol in a recreation of the sub’s conning tower, complete with both an attack and an aerial-navigation periscope, much like the one here on the sub.

Guests can get a glimpse of the crew bunks in the torpedo room of the U-505.

Guests can discover just how crowded life was on board this vessel, as well as the intricate mechanics that made the sub function.

The U-505 sits in its old location outside the Museum.